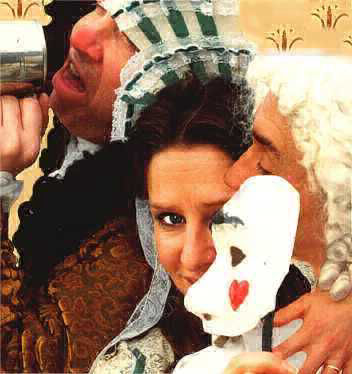 Set in the 1690’s it has all the ingredients of classic comedy. Two pairs of frustrated lovers, eccentric ladies of extreme fashion, cross dressing, bullying husbands, brawls, chases, comic trials, conniving servants, music and mayhem.
Sir John Brute and his wife despise each other. Lady Brute in turn loves Constant, but refuses to consumate that love… much to the consternation of the latter. Belinda harbours desires for Heartfree, who in turn loves nobody… or so he says. In the meantime Lady Fancyfull poses and preens …whilst loving only herself. Madamoiselle has eyes for Razor…but with whom do his loyalties lie?
Will love remain unrequited? Will Sir John ever sober up? Will the men’s wigs stay in place? Confused? ..... You won’t be - after you’ve seen Rain or Shine’s rollicking, rumbustuous, ensemble rendering of Vanbrugh’s Restoration comedy .